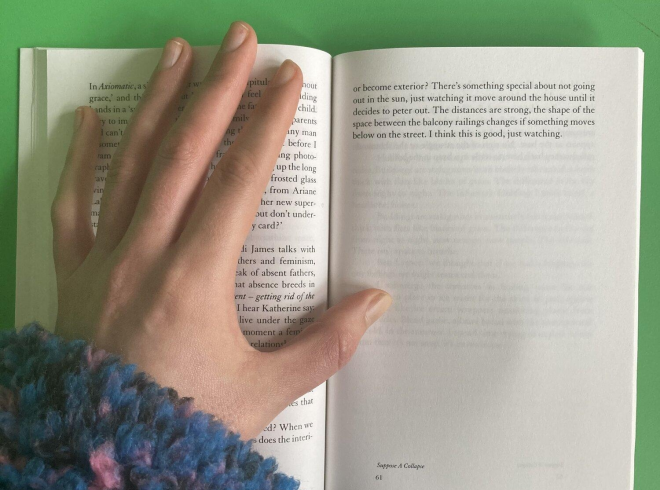 I grew up watching films with my mum. One of the most affecting was Mike Leigh’s Secrets and Lies. We laughed and cried, whilst watching a mother and daughter, on their respective sofas, watch tv and smoke fags. My dreams are the offbeat moments in these fictions where I smoke with my mum. I yearn for the imperfect feelings of familial harmony in Secrets and Lies, a meal eaten at a table, unacquainted people brought together.

It hurts, I said. It’s like the storm in my head broke the thunder directly above my flat, the lightning half a second before.

Suppose A Collapse arranges moments between two cities, each viewed through the lens of the other, intimately mapping the interiors of a fourth floor flat in Madrid and the childhood bedroom of a three-bed semi in Belfast. Memoir, poem and essay combine to form a collection of experiences based on the author’s changing relationship with her absent father, extended ‘(non)family’ and mother, while film and art inform the movement between lucidity and a fracturing present. How many times can we fold up our lives into smaller and smaller shapes until there’s no room anymore, only the one that we’re in?

Lucie McLaughlin is an artist from Belfast, Northern Ireland. Her work has been published in Faultline Journal of Arts and Letters, California, performed at Raven Row, London and exhibited at Lily Robert Gallery, Paris. She is currently on the MLitt Art Writing course at Glasgow School of Art.

Designed by Simon Josebury, publications are produced in groups - each series forming assemblages with common threads.