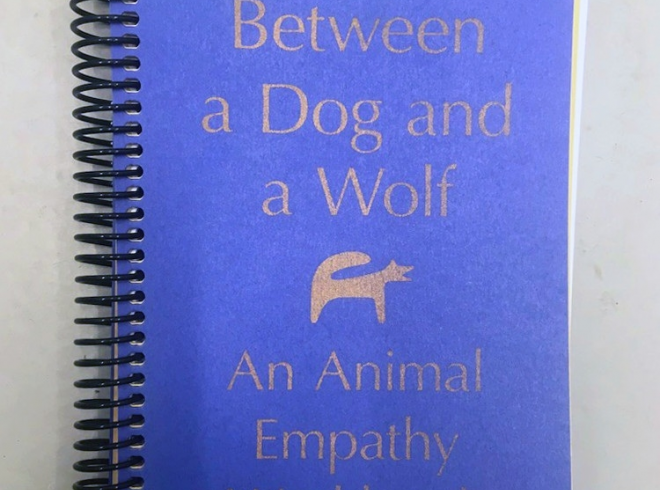 ‘Between a Dog and a Wolf’ publication – Sarah Browne

**Please note we're having experiencing a technical difficulty with our shop at the moment - please send us an email at info@ccadld.org with the details of the publication you would like to buy**

Between a Dog and a Wolf: An Animal Empathy Workbook is the culmination of a participatory public project initiated by CCA Curator (Public Programmes) and led by artist Sarah Browne. The material in this publication is the result of a 10 month programme of workshops, screenings, talks and performances which took place at CCA, around Derry city and beyond. Between a Dog and a Wolf attempts to see the urban environment through a new lens by asking the question: ‘What do animals know about our neighbourhood that we don’t?’ Through an open call process a community of interest was formed, and participated over a ten-month period in workshops, screenings, talks and performances.

Workshops were led by Aislinn O’Donnell, Clyde Doyle, Matt Green, Steve Batts, Laura Durán, Jessica Foley, Rory Harron and Didem Durak, centring on subjects such as philosophy, sound recording and movement practice. Through investigation of our relationships with animals in their intimate and personal dimensions, as well as the roles assigned to animals in public and political life, the group attempted to redraw boundaries around established groups and values in the city. The book is laid out in an instructional format, enumerating a series of exercises and documentation from the workshops as well as critical essays.