‘Why Not Call This a Life!’

‘Why Not Call This a Life!’ Auto-something: writing life: sites and affects is a three-part workshop by CCA Research Associate 2022 Lucie McLaughlin. These workshops take ideas of writing from life and hybrid autobiographical forms (auto-fiction, autoethnography, autotheory) as a frame for activity to generate new writing, conversation and research. Hosted online via Zoom on Wednesdays 9, 16 & 23 November 2022, 6pm–8pm.

*This event is now fully booked. Please email info@ccadld.org to add your name to the waiting list.

Through collective reading and writing in response to prompts we will explore how writing relates to observation of sound, image and object in order to construct and perform the world around it. Discussing the ethics and difficulties of ‘writing from life’ or ‘autobiographically’ via its social, cultural and political significance, we will develop new critical inquiries around the art and writing of others and our own practices.

In the first session we will explore the (sometimes compulsive) desire to describe the events, encounters and experiences that compose lives, looking to existing theories and definitions around art writing, theory and autobiography. Writing by Annie Ernaux, Mira Mattar, Lauren Berlant and Kathleen Stewart will be discussed.

The second session, taking Claire-Louise Bennett’s short story Invisible Birds as a starting point, will investigate the relationship between ‘settings’ and ‘selves.’ Questioning how writing, fictioning and thinking emerges through knowledge(s) of the places we find ourselves in, formed and re-formed over time.

In the final session we will read Brandon Taylor’s essay Bobos In Ikea focusing on minimalist trends in ‘novels of the self’ to question the limits of realism, storytelling, essaying and living.

This is a ticketed event, at a cost of £25 for three two-hour online sessions. The workshops will take place on Zoom. An invite and texts will be emailed in advance. Places are limited and booking is essential here for this Public Programme event. This is a paperless ticket, to avoid shipping please select Local pick up at CCA at checkout.

Lucie McLaughlin is a Belfast born artist and writer. She mainly works with sound and writing. She is interested in how art and language can be made unfamiliar by a collapse in distance between the ordinary and the imaginative, and how certain political atmospheres and socio-psychological states that in themselves cannot be easily articulated, emerge through practice. She has worked recently with Catalyst Arts, Belfast and BOMB Magazine, New York. Her book, Suppose A Collapse, was released in May 2021 with JOAN, a new publishing project for interdisciplinary artists’ writing. She is a Research Associate at CCA Derry~Londonderry 2022.

Banner image description: a photograph or scan of differently textured and patterned papers, fanned out on a surface so as to create horizontal lines where they meet. One strip of paper visible is bright orange. One is an abstract brown and green mottled pattern, one is a fuzzy beige colour.

Second Image (above) description: a long rectangular photograph showing at least eight postcards or images. They are arranged in a fan from the middle of the image to the far right. The front image shows an area of ground beside a river littered with old and broken skateboards. The image on the far right is also visible, it is a landscape photo turned on its side showing a deep blue sky, a pink mosaic sculpture of an octopus, blue sea and some green headland in the background. Only slivers along the long edge of the other images or postcards are visible.

Image 1 (from left to right) A photograph of a skyscraper in the dark, camera pointed up along its tall face. The building is illuminated by green light, in a freezing looking fog and partly obscured by the dark silhouettes of trees, some with leaves, some just spiky bare branches. Within the photo, a scan from a page is collaged on top, with small inky star symbols and some words reading in italics 'soft electro'

Image 2 A dim photograph angled down towards wide grey stone flooring, two feet in shiny trainers poking in from the top right corner. A children's squishy coral-coloured toy about the size of a baby, is splayed in the middle of the floor, smiling and looking up directly into the camera, it is some sort of animal superhero figure. In the top right hand corner of the photo, a scan from a book is collaged on top, it reads in small black lettering 'to the same height, approximately 10 feet tall, only one unit had incurred the instability of probable collapse.'

Image 3 A well lit photograph of a messy and colourful desk. Most of the photo is taken up by a print of another photo which rests on the desk, showing a carpark with a few cars dotted around it in the cold yellow light of dawn or dusk. A book 'Denise Riley, Impersonal Passion, Language As Affect' is at the bottom right corner of the desk. Other notebooks and bits of paper in red, white, yellow and other colours are scattered about on top of and under each other.

Image 4 A book of old black and white postcards is open on a table covered with more books of postcards. The postcards are partially obscured by the shiny white reflecting off the plastic film they are stored under. There are two postcards on the right, showing stone buildings with what looks like bomb damage. Two more postcards of similar design are on the right, but we can only see a sliver of them. The postcards have tiny writing at the top in French, one part says 'La Grand Guerre'. Near the bottom of the image, a green strip of colour has been digitally collaged on top, it reads in small black lettering: 'comes over & over again I looked open crisp translucent slides translucent paper my legs hurt from squatting can anyone cut this cream'

Image 5 A photograph from the outside of a slightly crumbly building facing a window on what is probably its ground floor, caught in the sun. The bottom of the window features a long line of thick metal spikes on a metal bar reaching across the windowsill, perhaps to stop birds from resting there. Propped between this metal bar and the windowpane is a print of a photograph of a street corner, with a woman holding a saxophone in a red dress in the sunshine. Above the woman there is a large red sign saying 'Delaney's' in a cartoonish, handwriting typeface. Above the photo, within the white frame on the print, a title reads 'Delaney's Belfast' in plain black lettering.

Image 6 A photograph of a feminine person from close up, showing her waist to her feet on the ground. She is walking away from the camera across what looks like a public walkway, there are concrete tiles of different textures. There is a shallow ramp on the bottom right, sloping towards the woman. She is wearing cobalt blue mule sandals with a block heel, a flowing mid length dress with a brown and pale circular pattern, with a blue swirling bottom section, matching her shoes. She carries a pale green-blue shoulder bag on her left side. 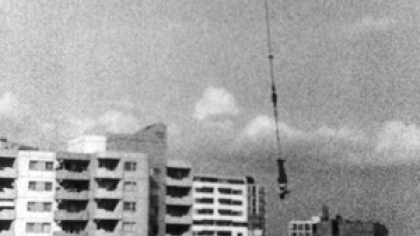